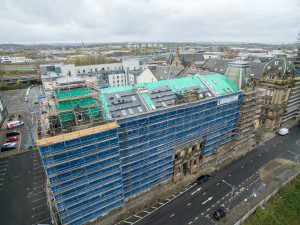 A building in the Tradeston area of Glasgow has been saved from dilapidation after intervention from the building’s factor, home and business owners and grant funding from Glasgow City Council.

The iconic B-listed building, which stands at 33 Dalintober Street/53 Morrison Street, was discovered to have severe defects in both the roof and basement car park, following a survey carried out by chartered building surveyors, Wiseman Associates Ltd.

The assessment concluded that the building’s 100-year-old roof would have to be replaced and restoration costs were tendered at £1.135 million.

Factor, Speirs Gumley, was able to secure a funding grant for 50 percent of the cost from Glasgow City Council with the rest of the costs being shared between homeowners and business owners.

Iain Friel, managing director of Speirs Gumley said, “I’m delighted that with the support of the Dalintober/Morrison Street Focus Group and many other owners, together with a huge helping hand from Glasgow City Council, this project is now finally well under way.

“The scale of the task in collecting such a significant sum of money in a short space of time cannot be underestimated, and is testament to the commitment of the owners to restoring their property and the dedicated team at Speirs Gumley.  Appointed Surveyors, Wiseman Associates and contractors GDN Contracts have been extremely professional and thorough throughout the process, and work is currently ahead of schedule.

“We firmly believe that this project could kick start the transformation of Tradeston area.”

Councillor George Redmond, executive member for jobs and investment at Glasgow City Council, said, “Glasgow City Council is delighted to have helped to restore this important part of our built heritage and safeguard it for many decades to come.

“This type of support is not just funding the protection of beautiful architecture, but an investment in the regeneration of a part of the city that continues to attract other investment and development and so contributes to the economic strength of Glasgow.”

Iain Thompson, a key member of the building’s Owner Focus Group said: “We’re so pleased that in the short space of time since hearing the news of the works needed and how much they would cost, that all parties involved managed to raise the funds required for the work to commence.

“We now are not only having a completely new roof, but also improvements to the underground car park and stairwells along with a refurbishment of the facade. This will hopefully conclude in us having our very historic and beautiful building in a better state than it’s ever been in before.”

Originally designed as a warehouse, the building was converted in 1999 into 60 flats and 4 commercial units.