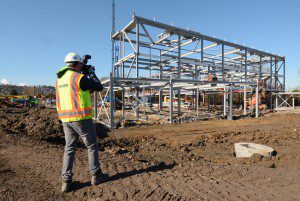 FORTUNE, it is said, favours the bold, and starting a new business at the tail-end of a global financial crisis certainly counts.  But that’s exactly what Alan Bryant did when, amidst an industry rife with uncertainty and tight budgets, he opened the first UK franchise of Multivista, an international organisation specialising in construction photography, webcams and video documentation.

Multivista provides construction and estate teams with permanent visual records of buildings and projects, which are invaluable for future facility maintenance and diagnosing potential problems. Alan, whose business is based in East Kilbride, explained, “My background is in photography and I shot a lot of construction photography. Clients often approached me requesting a ‘flavour’ of what was going on in a project – lots of branding and pretty pictures for brochures. I would supply them with a disk containing hundreds of pictures and then wonder what they did with them all.”

As they discussed the benefits of their “new” idea, Ian and Alan began getting more and more enthusiastic. “We thought we had our lightbulb moment and invented a revolutionary new product that would make construction photos more usable and improve quality assurance, assist facilities management, and help resolve disputes,” Alan said. “Then we Googled it and learned Multivista had already been doing all of that in the States for more than a decade.”

Founded in 2003, Multivista operates in almost every major metropolitan area across the United States and Canada. Alan and Ian contacted the company to express their interested in offering Multivista’s documentation services to the Scottish construction market.

Alan explained further, “Mike Harvey, the Chief Sales Officer, just happened to be coming over to Dublin a month later, so we went over and met up with him. They were already thinking about expanding into the UK or Europe and after a great first meeting, we began the process of Multivista expanding into the UK.

“A short time later, we went over to the States to visit a few of the Multivista offices and see their guys in action. The company’s two head offices are located in Vancouver, Canada and in Phoenix, Arizona. A month following the visit, we bought into the business and brought it over to Scotland. Multivista Scotland is the only franchise in the UK at the moment, but there are plans to open a London office.”

After a trip to check out the North American head offices, Ian and Alan launched Multivista Scotland on January 1, 2014. Already, Alan and his team have moved offices three times to accommodate continued expansion. Their team now consists of five members and has documented almost 50 construction projects. Although they weathered the global recession, Alan says one of the biggest challenges is getting clients to understand the benefits of a new product they have never used.

“When we started in January 2014, no one had heard of us or what we did,” Alan said. “We basically hit the pavement and got ourselves out there to show clients the benefits Multivista could bring to their projects.

“Multivista digitally records the entire construction process from start to finish. The clever thing about what we do is that these photographs are then linked to the architectural plans and hosted online. This means that you can search any project and within seconds, go straight to the area you are interested in, and click on an arrow (or hotspot) that will instantly let you see high-res photographs of what is in the walls, floor or ceiling. It’s a very simple process. Once you blow up the photograph, you can add comments to it or email it. There’s a lot of usability within the platform.”

The technology ultimately brings visibility to a project and can save a lot of time and money both during and post construction. “Using the Multivista App, you can essentially conduct a comprehensive virtual site tour within five minutes,” Alan said. “This results in a lot more people looking at a project and quality assuring it. Issues are identified earlier and the result is a better-built building. This is the premise of what we do.”

Estate and maintenance teams are some of the biggest fans of Multivista’s documentation packages. “I always thought it was strange that estate teams had little or no connection with a brand new project until it was finished,” Alan said. ”Instead of being handed a bundle of drawings to keep safe for the next 25 years they can use our platform to reference the actual as-built images.

“They can go back in time to when the framing was going up, see what exactly might have caused an issue, and deal with it properly and efficiently.”

Multivista documentation works across a number of verticals, but a major question with new technology in a new area is who will take the first leap? “We were very fortunate,” Alan explained. “One of the first large projects we did was the TIC (Technology & Innovation Centre) building at Strathclyde University.

“The building was seven months from completion when we did a presentation to the University’s estate team. They liked what we could provide for them and asked if we could start documenting the project the following Monday!

“Clients see the benefits of having an entire project documented in many ways. Some use the Multivista platform as a team collaboration tool, others use it as an insurance policy for disputes, and long-term owners use it as a practical facilities maintenance resource.

“The system adds transparency and accountability to any project. If something goes wrong, you have a complete digital record of how a building is put together.

“The documentation we did for Strathclyde University, which began prior to the second sheeting of all the walls and ceilings, became crucial to them. They now have a complete photo as-built memory of all the mechanical and electrical systems behind the walls and above the ceilings. For long-term estate maintenance, they have a full record of how all the services were installed rather than, as we call them, ‘as-remembered drawings’, a widespread bane of the industry. We also video recorded the hi-tech building’s handover/training sessions for the estates team, thereby preventing future knowledge loss.”

“We quickly saw the benefits of using Multivista when the system and service was presented to us,” said Stella Matko, Director of Estates at the University of Strathclyde. “I was very impressed with having the ability to monitor site progress from my desk.

“Another major benefit is having a record of the construction progress, which allows us to manage quality and ‘peel back the layers’ to understand how services and finishes have been co-ordinated throughout the works. Additionally, Multivista recorded the training and commissioning sessions, which allows the University to re-familiarise themselves with the building systems whenever necessary. Multivista really is a worthwhile investment!”

With regards to another project, Alan continued, “We’ve just started documenting the new Dundee railway station for Dundee City Council. We’ve installed a webcam and we’re photo-documenting the new station for the next two years – the infrastructure and the building itself. This project provides a good example of the unique site conditions each project presents our photographers. Because it’s a live railway, our photographers must workaround and accommodate a live railway’s schedule and activities in order to document the platform walls.

“We also recently worked on a new building in Glasgow where the steelwork was designed incorrectly. The project architect was viewing our photographs when he picked up on a problem prior to the roof’s construction. If the issue hadn’t been identified, a portion of the roof would have had to come off and be re-welded – at considerable cost.

“Another great advocate of our services is the Greater Glasgow & Clyde Health Board. They initially decided to have Multivista document the construction of the East Pollokshields Health Centre as a trial project.  Within three months, they decided to contract our services for both the Eastwood and Mary Hill Health Centres as well.”

“Multivista has provided us with an additional set of eyes and a record of the construction process,” said John Donnelly, General Manager – Project Development at the Greater Glasgow and Clyde Health Board. “Their construction documentation services is increasingly valuable to us in many of the contractor-led procurement processes. We’ve had great input from the Multivista team for both training and support.”

Most of what Multivista offers sounds like good, old-fashioned common sense. While they have the Scottish market to themselves at present, Alan admits it’s inevitable that competition will emerge – and when it does, he’ll welcome it.

“Competition is a good thing and in the States and Canada, competition already exists,” Alan explained. “It will happen over here. We’ve steadily expanded in our first two years despite the struggles we face such as offering a unique service and having to work with tricky procurement rules. With competition, there would be more exposure about what we provide and that would benefit us.”

“Many of our clients are increasingly adding what we do to the specifications and prelims. This ensures collaboration among all parties at the commencement of a project.

“Although Multivista operates primarily in North America, the company is beginning to expand worldwide. London is high on the expansion hit list, and there are talks of other offices opening in Asia and Europe, but the company continues to expand their product as well as their terrain. Multivista is constantly evolving and introducing new technologies. For example, the Multivista BIM Integration program is really exciting for Multivista Scotland and we are confident to have some new Scottish projects fully integrated with BIM starting in the New Year.”

With the UK passing new legislation to become a world leader in BIM integration, Alan and Ian’s bold decision to jump into the world of digital construction documentation is starting pay off.