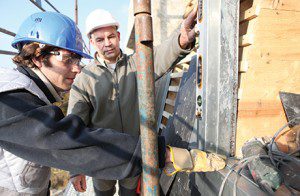 A new report has revealed that the skills shortage in the Scottish construction sector is reaching “crisis point”.

As recently as the third quarter of 2013, virtually no contributors to the RICS UK Construction Survey were reporting problems in this area.

The availability of finance and regulatory and planning issues were also cited as constraints.

Some good news did emerge, however, from the survey with the number of new construction projects in Scotland increasing, particularly in infrastructure and commercial sectors. A substantial proportion of respondents reported an increase in workloads.

Sarah Speirs, director, RICS Scotland, said, “While it’s exciting to see that the Scottish construction market is experiencing growth, this will only be sustainable if the continuing skills gap is addressed. The availability of both blue collar and white collar construction workers is reaching crisis point. Without the relevant skills, we will not be able to grow many of the Scottish Government’s priority construction sectors such as infrastructure.

“Currently, while we know that there is a serious shortage of skills, we don’t yet know why we have seen such a dramatic drop in the labour market over the past five years. Part of the problem is the legacy of the collapse in the sector following the onset of the global financial crisis. Many professionals and other skilled workers chose to leave the industry and quite simply have not returned or been replaced. A real focus on attracting more young people into the industry is critical alongside an expansion of apprenticeship opportunities. ”

William Bowie MRICS, Doig + Smith Glasgow, said, “We continue to see increasing confidence in all sectors of the industry resulting in workloads continuing to rise. The availability of qualified professionals to match this increasing workload remains a challenge.”

Chris Peace, managing director of Peace Recruitment, who has been placing RICS professionals for over 12 years, added, “Although the construction sector is definitely experiencing growth right now, this can only last for so long without a solution to the skills shortage.  We are finding that clients seem to all be looking for staff at a similar level, which is usually in the 30k-40k salary band. Generally speaking someone at this salary level now might have been graduating around 2008/2009. Graduate recruitment was basically non-existent during this time, hence the supply and demand issue now. We are advising clients to consider investing in graduates now, up-skill existing staff members or bring in more experienced industry professionals.”