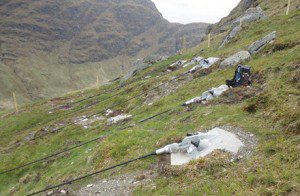 THE Rest and Be Thankful carries the busy A83 trunk road between Arrochar and Inveraray through mountainous terrain in the west of Scotland.

The pass has suffered frequent debris flows over recent years triggered by heavy rainfall events. However, thanks to continued investment from Transport Scotland, through their trunk roads operating company BEAR Scotland, a series of mitigation measures installed on the hillside are dramatically reducing the impact of debris flows on the trunk road.

A network of catch fences of heavy duty, steel wire ring-mesh panels has been installed over recent years. These barriers have proved successful in preventing debris flows from reaching the road.

Site investigation work undertaken in response to a debris flow that initiated 350m above the road identified the vulnerability of a boulder, assessed to be in the order of 300 tonnes. The near under-mining of the boulder by the debris flow highlighted the need for protective action and a plan was put in place to prevent a potentially catastrophic failure.

In response to the situation a partnership was brought together by specialist geotechnical contractor Geo-Rope including Perth-based Consulting Engineers Waterman Infrastructure and rockfall mitigation specialists Maccaferri. A design concept was quickly developed and put forward by Georope to BEAR for consideration.

Waterman Principal Geotechnical Engineer Chris Gell, said, “Controlled removal of the boulder was discounted at an early stage due to concerns that this may result in a subsequent debris flow – site assessments by Geo-Rope suggest that the boulder is currently acting as a ‘choke’ to material behind and above.

“As well as this, the safety and cost of disposal of the large quantity of blasted material that would be produced, could not be assured at reasonable cost.

“The installation of some form of restraint system was therefore proposed. The design required a bespoke approach in order to achieve a solution that would successfully restrain the boulder, whilst also being practical to install 350m up a hillside. At the same time, we had to achieve Transport Scotland’s requirement for a 60 year design life for the system.”

At an early stage, it was determined that the best solution would be to utilise stable areas of the hillside located twenty to thirty metres above the boulder. A series of ground anchors would be installed into this region and these would then be connected to the boulder by means of high strength tendons – effectively tethering it in place. 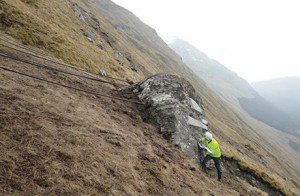 Mr Gell added, “Our previous work with Maccaferri, who supplied many of the debris flow barriers in place at Rest and Be Thankful, helped guide our thinking as to how best to create a suitable means of permanent restraint for the boulder.”

As the design evolved, it became apparent that ultra-high strength, Kevlar tendons manufactured by Maccaferri subsidiary, Linear Composites, would be an ideal method of linking the boulder to the ground anchors above the boulder.

Following temporary stabilisation and monitoring of the boulder by Georope, anchors fitted with bespoke high-strength termination plates were installed into the slopes above. 90 mm diameter holes were then cored through the boulder to accept the tendons. It was critical to achieve an accurate alignment of the drill holes in order that tendons would correctly align with anchor positions higher up the hill.  Geo-Rope’s specialist access, pneumatically powered drill rig proved ideal and diamond tipped core bits were used to ensure a smooth and accurate bore profile.

Each of the seven tendons was connected to the bespoke, high-strength steel anchor plates using proprietary Crosby shackles before being fed through the boulder drill-holes and tensioned against the down-hill face of the boulder.

Dr David Cheer, Rockfall Mitigation Specialist for Maccaferri explained the process. “The tendons chosen were from the Kevlar fibre, Parafil range, manufactured in UK by, Linear Composites. They are of the same system specification as those used in launching the UK military’s Longbow tank bridges.

“Each tendon has a capacity of 45 tonnes and, being made from sheathed polymer fibres, has near unlimited environmental durability, while the Kevlar fibres exhibit virtually no long-term loss of mechanical performance.”

According to Maccaferri, the extremely low weight (less than 0.6 kg/m) of the Parafil makes them easy to handle without the need for mechanical handling equipment, hydraulic manipulators or heavy tools etc, all of-which removes a variety of risks and costs from the site works.

The tendons were fitted with anodised, high grade aluminium alloy terminations also supplied by Linear Composites. The terminations positioned on the downhill face of the boulder are adjustable allowing the facility to add tension to the tendons after installation. This also allows direct and full transmission of the forces from the boulder through the tendons and the upslope non-adjustable terminals then on through the shackles and into the anchored steel plates.

The tendons are positioned in a fanning arrangement which will maintain the stability of the boulder in both the along-strike and down-dip directions on the slope. This is particularly important given that the exact failure mode of the boulder cannot be predicted with any precision.

Ground anchors were high-yield hollow bar type, installed with sacrificial drill heads as have been used successfully in designs by Waterman on previous works at the Rest and be Thankful.

This complex and demanding phase of site work at Rest and Be Thankful was undertaken by locally based geotechnical contractor, Geo-rope working in contract to BEAR Scotland.

It builds on site condition and stability surveys by Geo-Rope and previous detailed geomorphological assessments by Geomorph Consulting.

Work to maintain the viability of the Rest and Be Thankful Pass is a high priority, with the Scottish Transport Minister Derek Mackay, recently announcing further investment to improve resilience and mitigate the effects of future landslips to the A83 corridor.