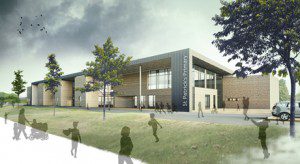 Inverclyde Council’s £7 million plan for a new building for St Patrick’s Primary in Greenock has achieved financial close, clearing the way for construction to begin.

The new state-of-the-art building for St Patrick’s Primary will be on the original Broomhill Street site following the demolition of the old school.

The original St Patrick’s Primary was initially earmarked for refurbishment as part of Inverclyde Council’s £270 million Schools Estate programme delivering new or refurbished schools across the area. However the Council recognised the cost of building a new school at the same site could be around £100,000 less than a refurbishment because of the greater amount of Government funding that would become available – £3.4 million from the Scotland’s Schools for the Future programme.

Grant Robertson, schools programme director at the Scottish Futures Trust said, “Protecting local jobs. Creating better schools. Achieving value for money. These are just a few of the benefits being delivered through the Scotland’s Schools for the Future programme that SFT manages. I very much look forward to seeing St Patrick’s Primary open and witness the real value of the programme with pupils being taught in modern, first-class facilities.”

The school is being delivered by hub West Scotland, the Council’s development partner, in conjunction with Main Contractor Lend Lease and Architect Holmes Miller.

Debbie McNamara, CEO of hub West Scotland added, “This is our first project to be developed with Inverclyde Council which also utilises the Primary School Reference Design that is being successfully delivered with other local authority partners. We are committed to delivering this new school facility late next year.”

Work will begin on site over the next few weeks and is due to be completed by October 2016.

The school will be decanted to the former Sacred Heart Primary school until the new building is ready.