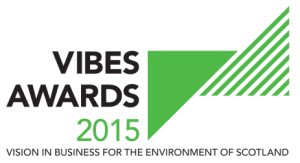 Taylor Wimpy West Scotland is one of the 27 Scottish organisations that have been shortlisted for this year’s Vision in Business for the Environment of Scotland (VIBES) Awards following a record number of entries.

Companies from all over Scotland entered the 16th annual environmental award scheme which recognises and rewards the commitment, actions and achievements of Scottish companies working hard to reduce their impact on the environment.

Entries to this year’s awards represented a range of sectors and sizes, demonstrating the diversity of companies which contribute to Scotland’s sustainability.

Taylor Wimpy West Scotland has been shortlisted for the Cooperation Award category. The housebuilder works with a number of partners to ensure its developments are environmentally, socially and economically sustainable.

The shortlisted business will attend a special ceremony on the 26th November 2015 at the Sheraton Edinburgh Hotel, where the winners of all eight categories will be announced.

Gillian Bruce, chair of the VIBES Awards, said, “The VIBES Awards are dedicated to recognising companies which have taken significant steps to reduce their impact on the environment and we’re thrilled to report that we have received a record number of entries this year. The quality and range of entries illustrates the diversity of Scottish businesses supporting the environment, and it is this work that we want to showcase and reward.

“Each of the shortlisted companies has impressed the judges with their sustainable practices and commitment to the environment and we look forward to celebrating with each of them at the 16th VIBES Awards ceremony later this year.”