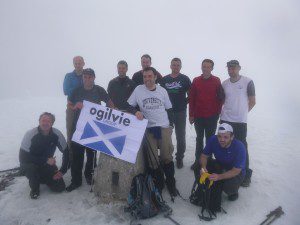 ELEVEN members of staff at Ogilvie Group climbed three mountains and over 11,000 feet in 24 hours to raise £2400 for charity.

A team from across the Group’s Geomatics, Fleet and Construction businesses completed the gruelling Three Peaks Challenge, climbing the three highest peaks in the UK, one after the other. They started at Ben Nevis in Scotland, then drove straight to Scafell Pike in England and finally on to Snowdon in Wales.

The money will be shared with the Motor Neuron Disease (MND) Association, Marie Curie Cancer Care, The Prince and Princess of Wales Hospice and the Willen Hospice.

Mark McGarragh, Managing Director, Ogilvie Geomatics who led the initiative, said, “It was a really tough challenge and at times really grueling, but everyone in the team is really proud to have raised so much for charity.  We set ourselves a target of 24 hours and managed to complete the challenge with 20 minutes to spare.”