Home News All under one roof: super campus for East Kilbride schools 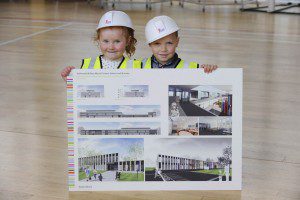 The £12 million project will bring all three establishments in East Kilbride together under one roof on a purpose-built campus adjacent to the schools’ current town centre site.

Part of the Council’s £800+ million Primary Schools Modernisation Programme, the campus is being developed by Kier Construction, with the Scottish Government contributing £4.7 million towards the rebuilding project through the Schools for the Future initiative.

The community nursery will be equipped to provide 52-week care for 0-5 year olds in three playrooms aimed at each stage as they prepare for the move to primary education. Although each of the schools and the nursery will retain a separate identity, the new modern campus will allow for areas of shared space including:

Pupils will remain in their schools throughout the construction which will be carried out as a tandem build.

As the first sod was cut at the East Kilbride site Councillor Jean McKeown, Chair of South Lanarkshire Council’s Education Resources Committee said, “We are extremely proud of our Schools Modernisation Programme, which has already seen the rebuild of 106 primary schools. Now that work has started on this site, we now have 14 schools in construction as the project continues apace.

“The plans for the new building here look fantastic and will offer fully flexible accommodation for the pupils of both schools and the nursery. I can’t wait to visit the finished school.”

“This is an exciting milestone for the new school campus including Halfmerke Primary School and Community Nursery and West Mains School. The new school will be a fantastic environment for pupils to learn in and it’s encouraging there will be a number of areas designed specifically for pupils with additional support needs. I’m pleased the Scottish Government could provide more than £4 million in funding towards the project through our Scotland’s Schools for the Future programme and I look forward to seeing the new school when it opens to pupils next year.”

Managing director of Kier Construction’s Scotland & north-east England business, Brian McQuade, added, “We are delighted to build this modern education campus.  We have a great deal of experience building a number of schools as part the Schools Modernisation Programme and this is the largest educational facility we have built under the South Lanarkshire Council Framework.  The fantastic teaching, nursery and sporting facilities at this new campus will greatly enhance the lives of the nursery and primary school pupils and local residents by encouraging greater access to education, sports and community amenities.

“Furthermore, this project will provide a substantial boost to the local economy. The significant financial investment, combined with the employment opportunities that this development will create for locally based suppliers and subcontractors is great news for the people of South Lanarkshire.”