Home News New Waverley to flourish ‘underneath the arches’ 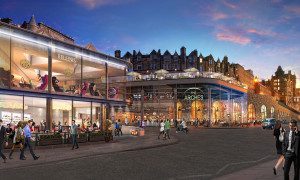 A brand new retail and leisure quarter centred around a row of Victorian arches has been unveiled as part of the latest phase of the £150 million New Waverley development, currently transforming the heart of Edinburgh’s Old Town.

The C-listed brickwork arches were originally constructed in 1875 to create double-fronted openings beneath the city’s Jeffrey Street – one of several Victorian ‘bridge streets’ in the area designed to create more light and development space in an effort to improve overcrowding and poverty along the Royal Mile.

However, due to the expansion of the railway terminus at Waverley Station in the second half of the 19th century, the Jeffrey Street ‘bridge’ was never completed – resulting in one side of each of the 19 arches remaining exposed.

This unique historical curiosity has allowed Artisan Real Estate Investors, the developers behind New Waverley, to create an exciting leisure-based environment that will bring the high-vaulted bridge structure back to life, creating an eclectic community of bars, restaurants and independent retailers beneath its arches.

“This is a wonderful opportunity to create a completely new kind of retail and leisure experience, right in the heart of Edinburgh’s Old Town,” said Clive Wilding, Artisan’s project director.  “The arches were traditionally used for storage areas and have never been accessible to the public – so it’s an amazing opportunity to open up an historic part of the city that has never been seen before.

“The arches will bring an interesting and vibrant new dimension to our New Waverley development, which is now progressing on all fronts. We are now speaking to a wide range of potential occupiers but want to see them converted into bars, cafes, restaurants and independent niche retailers – as well as providing distinctive venues for arts events and food markets. This will bring tremendous energy to the area, linking closely to both the Royal Mile and the new public square which lies at the heart of the development.”

Because of the original vaulted bridge design, each one of the 19 arches gradually rises in height, with 15 being tall enough for public use, and most offering dramatic double-height arched ceilings. The largest ‘flagship’ arch will be designed over three levels, and will be crowned with a rooftop terrace with sweeping views over Waverley Valley.

Work on the arches will start in the summer, with the project targeted for completion prior to Christmas.

The New Waverley development is currently progressing with the construction of a146-apartment Adagio Aparthotel facing directly onto the Royal Mile behind a retained façade of the C-listed Sailors Ark building. This phase also includes the start of works for a new £6.5 million public square linked to the Aparthotel, creating a vibrant central hub for New Waverley surrounded by 160,000 sq. ft. of high-quality grade A office space and 28 new retail businesses – including shops, restaurants and cafes.

Construction work on the initial development phase of two Whitbread hotels with frontages on to East Market Street and Cranston Street is also progressing. Work on the two hotels – a 127-room Premier Inn and a 121-room Hub by Premier Inn – began in November 2014 with a completion date set for autumn 2016.

Edinburgh-based Staran Architects have been appointed to deliver the arches project, with Eric Young & Co and Culverwell acting for Artisan in the leasing of the arches.