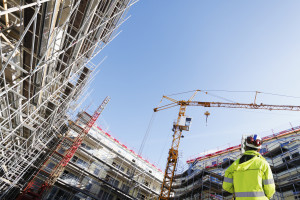 THE latest Construction Trade Survey shows that firms across the industry reported an eighth consecutive quarter of growth in activity in the first quarter of 2015.

Large contractors, SMEs, civil engineers and product manufacturers all enjoyed growth in output in Q1, and further expansion is anticipated throughout 2015.

Dr Noble Francis, Economics Director at the Construction Products Association, said, “Activity rose in the first quarter of 2015 compared to a year earlier according to 50% of contractors, on balance. Furthermore, increases in orders and enquiries indicate that the construction industry’s longest expansionary streak in six years is set to continue over the next 12 months.

“Increased activity was led by the private housing sector, in which 54% of firms, on balance, reported a rise in output.  Increased output was also reported in private commercial, the largest construction sector, where 23% of firms, on balance, reported rising volumes of offices and retail work. This momentum is set to continue, as it was in the private housing and commercial sectors that contractors registered growth in order books in Q1. Specialist contractors and SMEs also reported a noticeable upturn in new enquiries in the quarter.

“Increased activity over the last two years has widely translated into higher tender prices, but contractors, SMEs and civil engineers also reported elevated costs on the labour and materials side, which in turn are squeezing profit margins. Only product manufacturers reported a significant benefit from the downward movements in fuel, energy and exchange rate costs. A balance of 81% of contracting firms experienced cost increases during Q1 and 63% reported an increase in labour costs. In addition, 59% of contractors reported difficulties in recruiting plasterers in Q1 and 56% experienced difficulties in the availability of bricklayers. Ongoing difficulties in recruiting skilled on-site trades will contribute to this upward pressure on costs.”

Stephen Ratcliffe, Director UKCG, added, “The continued growth in construction reported by the latest survey is encouraging, and hopefully the clear general election result will help minimise any impact on work pipelines. Rising costs continue to reflect skills shortages, and the need to focus on recruiting and training new people into the industry.”

Richard Beresford, Chief Executive of the National Federation of Builders, said, “Companies are finding that prices agreed during leaner times have risen and are eroding profits, despite a rise in orders. With the industry entering a growth period, companies must take a longer term view when setting prices to ensure their survival.”

Dr Diana Montgomery, Chief Executive of the Construction Products Association, concluded, “Surveys from the CPA, wider industry and independent sources indicate that the UK construction recovery appears set to continue through 2015.  Despite rising costs and general election uncertainties, enquiries and orders are clearly translating into activity on the ground and contributing to steady and consistent growth.”