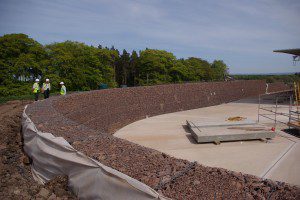 THERE are scores of brown-field site redevelopment projects under way throughout the country where site won soils, which are costly to dig, costly to shift and costly to dispose of, especially if they are of questionable provenance, need to be dealt with.

The construction industry has made huge progress in its approach to the management and reuse of site won soils and one company at the forefront is Perth-based geotechnical specialists, Maccaferri. Their approach is simple and straightforward and has lead to the successful completion of a host of high profile projects.

Maccaferri specialises in slope stabilisation and retaining wall design and construction and in this niche area of expertise they are frequently called on to advise on the most cost effective means of re-using the thousands of tonnes of site reclaimed soil and fill materials generated during the redevelopment of old construction sites.

As we know, every household in the UK is constantly being urged to minimise waste by re-using everyday consumables and, wherever possible, recycling waste. The same is happening in the world of construction.

Developers often have to work within strict planning guidelines which require them to recycle and re-use site won materials. Where dig-out and dump was the norm of years gone by, this casual approach to gobbling up of natural resources has been replaced by the goal of “Site Sustainability”.

In the following examples, we are able to see where the principles of sustainable geo-engineering have been employed.

At the recently commissioned Glencorse Water Treatment Works near Edinburgh, Design and Build Contractors, Black & Veatch used elaborate camouflage techniques in their quest to hide the 10 hectare site in the picturesque Pentland Hills.

The treatment plant’s setting required careful design and planning to reconcile the very large buildings and reservoir with the surrounding area.

The solution was to effectively “bury” the works into a carefully re-profiled landscape, created by placing thousands of cubic metres of excavated material behind massive retaining walls, up to 9.0m high in places.For these structures, Maccaferri Construction was brought in to provide design and installation expertise.

Maccaferri designed and built a network of mass-gravity and reinforced soil structures comprising their stone filled Gabion Terramesh units in combination with high strength geogrids sandwiched between layers of compacted back fill. The Geogrid acts as a reinforcement medium which causes the wall and the retained material to work as a single physical mass with immense strength and durability.

At the time the £130m scheme was completed it was the largest capital project commissioned by Scottish Water and was described by Professor Paul Jowett, Chairman of the Institution of Civil Engineers, as being  “ not only an exemplary project in terms of critical infrastructure but also in terms of sustainable development and carbon reduction.”

At Gatwick Airport, a giant bund, 350m long and 16m high was constructed using recycled site won materials, to screen nearby villages from new aircraft stands and taxi-ways being built as part of a £43m improvement scheme.

The stands provide remote parking for aircraft and include two areas capable of housing the Airbus A380 – the world’s largest commercial passenger airliner.

Consultants, Scott Wilson, conceived a structure which would, from the village perspective, be as natural in appearance as practicable, with a varied profile and heavily vegetated to blend in with the local woodland setting.

Their solution was a reinforced soil structure comprising 97,000sq m Paragrid reinforcement geogrid in combination with over 180,000 tonnes of back fill, the majority of which was recycled granular materials and site won clay, reclaimed from other areas of the airport site.

Paragrid is a biaxial grid comprising composite geosynthetic straps with a polyester core within a protective polyethylene sheath. The grid is placed horizontally between layers of compacted structural back-fill, nominally 600mm in thickness.

Biomac, a bio-degradable erosion protection blanket also from Maccaferri, was used to face the sloped surface of the geogrid wrap.

This allowed the inclusion and retention of a face layer of compacted top-soil which was later hydro-seeded to promote rapid establishment of vegetative cover.

More recently, the commercial redevelopment of an old gas works site at Bell Green, Sydenham in South London, set the sustainability bar at an even higher level.

Here, Contractors Gallagher Construction were faced with a complex, brown field site redevelopment on poor/contaminated ground with cost and planning restrictions that required the exclusive re-use of site won material rather than importation of new. Nothing to leave the site –nothing to be taken in.

Again, Maccaferri was brought in for expert design advice, this time for the construction of two retaining walls required for a heavy vehicle access ramp. Maccaferri concluded that a mass gravity structures would not be possible because of the poor ground conditions and the strong probability of settlement.

Also, the impermeable nature of the fill material meant it was highly susceptible to volume change due to retained moisture content. Because of this, adequate compaction would be hard to achieve.

Maccaferri’s solution was the introduction of Paradrain, a geo-composite reinforcement grid which has integral drainage capability.

Paradrain – manufactured by Linear Composites, a Maccaferri Company – not only provides the required structural reinforcement but also allows relief of pore water pressure within the compacted material.

Paradrain was used in combination with Maccaferri Green Terramesh, a modular formwork system designed to produce a steeply sloping vegetated-faced wall as part of a reinforced soil, slope construction.

A single length of double twist wire mesh forms the base and upper reinforcing panels and the Green Terramesh facing unit. A bio-degradable blanket behind the sloping faces of the unit retains topsoil, controls erosion and promotes rapid vegetation establishment, leading to an overall “green” aspect.

As social, political and environmental pressures continue to grow, the demand for cost efficient, sustainable solutions to geo-engineering challenges will increase.

In the cost conscious world of civil engineering, we can no longer dig-and-dump and ignore the consequences.

A new culture of retain, recycle and re-use is permeating the industry, leading to the construction of spectacular new buildings that can justifiably claim to be sustainable.