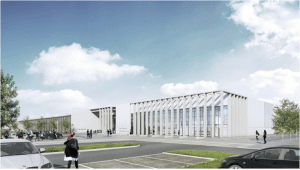 THE construction of the new £48.5million Wick Community Campus has reached an important milestone with the completion of the first phase of steelwork.

Work on erecting the project’s steelwork began on schedule at the start of March, with the building’s Block A the first to be completed. Block A is the main core of the building and will be home to the facility’s atrium and various dining and break out areas.

The facility, which is set to replace the existing Wick High School, South Primary and Pultneytown Academy Primary School, is being delivered by hub North Scotland after it was appointed as a development partner by the Highland Council. The main contractor for the build is Morrison Construction, part of the Galliford Try group of companies.

The innovative campus is set to consist of two senior school teaching wings as well as a separate primary school with its own access. A special needs wing, sports block, library, swimming pool and fitness suite alongside three sports pitches will complete its offering.

Angus Macfarlane, chief executive of hub North Scotland, said, “The completion of the first phase of steelwork is an important milestone for the Wick Community Campus project. The work has been completed on schedule and is a visible demonstration of the progress being made on site.

“hub North Scotland is committed to delivering a first class facility that will be an integral part of the Wick community for generations to come. We look forward to continuing to work in partnership with Morrison Construction and the various other stakeholders to deliver a project that everyone can be proud of.”

Scott Alexander, director of Morrison Construction – Highland, added, “The completion of the first phase of steelwork marks a huge advancement in our project schedule, and we are delighted that the team have completed this operation on programme.  Working with both hub North and the Highland Council, we are well on schedule to deliver this enhanced learning facility on time for the local community. This step really is testament to the hard work from our people on site and the continuing positive relationship with our delivery partners.”