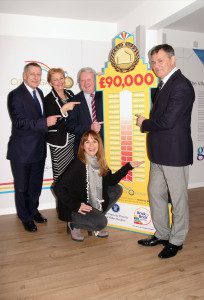 THE ‘Brick by Brick Appeal’, which aims to raise funds to build a new purpose-built facility for Glasgow’s Prince and Princess of Wales Hospice (PPWH), is set to receive a substantial cash donation from City Legacy, the developers of Glasgow’s Athletes’ Village.

For every one of the 300 homes sold at the development, first used by athletes at last summer’s Commonwealth Games, £300 will be presented to the Hospice, which will equate to £90,000 when all sales are finalised.

The commitment was made by members of the City Legacy consortium, to Rhona Baillie, Chief Executive of the PPWH. TV presenter and PPWH ambassador, Carol Smillie, also attended the launch.