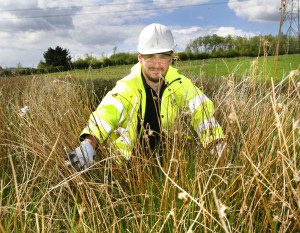 A Scottish property developer has devised innovative plans that will protect the current population of newts and help them grow in number.

The plans will include an underpass, under the new proposed link road for the newts to use and an expansion of the nearby local nature reserve.

Scottish Natural Heritage, the government body responsible for the conservation of Scotland’s wildlife, granted the licence to the Hamilton based developer following a detailed application which confirmed that the development will not affect the favourable conservation status of the species.

Scott Knowles, a senior ecologist with Heritage Environmental Limited (HEL), ecological consultants to Banks Property, said, “To be granted the licence to allow works to build in an area inhabited by a rare species protected by the European Commission highlights the commendable ecological focus at Banks Property. The team has gone to great lengths to show that through detailed habitat creation and management the amphibian population could continue to thrive in years to come.”

The document includes details of all mitigation measures that will be undertaken in relation to the development, including the provision of newt underpasses.  It also includes details of extensions Banks will make to the Local Nature Reserve that will provide a new habitat which will be designed and managed for the benefit of Great Crested Newt and other amphibians.

Great Crested Newts have been subject to significant habitat loss since WWII when there was a huge amount of change in how land was managed, which is why they are now protected by European and UK legislation.

Scott added, “The sort of measures Banks Property is taking to ensure the building work does not affect the amphibian population in the area is absolutely vital and a measure of its commitment to environmental matters.”

Through a commitment to protecting the local ecology, Banks Property successfully demonstrated that the population of Great Crested Newt would not suffer a decline and that a detailed management plan involving creation and management of retained habitats will allow the population to continue to grow and expand from the adjacent nature reserve.

If approved, the development would represent a £200 million investment, facilitating an estimated 700 jobs – with firms in the local area encouraged to join the supply chain.

Colin Anderson, director at Banks Property, said, “Being awarded this important licence is testament to our development with care approach at Banks Property. We are pleased to be doing our bit to safeguard such an important pocket of rare wildlife, including manual investigations of construction routes as well as developing long term mitigation measures and habitat compensation.”

The 1,040 homes earmarked for Glenboig are part of a Community Growth Area aiming to deliver 3,000 new homes allocated in the North Lanarkshire Local Plan. It is estimated this development will support approximately 2,500 constructions jobs and provide a boost of around £1 billion to the North Lanarkshire economy.