Home News Isle of Barra hotel on the market for first time in 40... 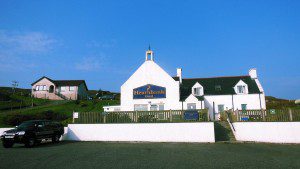 HEATHBANK Hotel on the Isle of Barra in the Outer Hebrides is set to change hands after more than 40 years ownership by the MacLeod family, following the decision by Joe and Kathleen MacLeod to retire.

It is the first time the hotel has come on the open market since opening its doors in 1974, which saw the late 19th century mission house, initially, converted into a small hotel with bar and restaurant facilities.

With its popularity among visitors to Barra growing over the years, today, Heathbank Hotel provides five letting bedrooms. The hotel, which is located in tranquil Northbay, is ideally placed for the island’s famous airport, the only one in the world that uses a beach as the runway for its scheduled flights. Selling agent Colliers International is inviting offers around £375,000 for the hotel which, before being transformed into one of the island’s favourite hostelries, played host to the cast and crew during the making of the iconic Whisky Galore film.