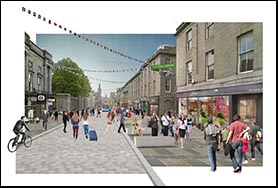 NEW proposals which will help to shape the heart of Aberdeen for the future will be revealed to the public this week as the City Centre Masterplan project reaches an important milestone.

Comments from the people of Aberdeen around what they think is needed to improve the city centre have helped to shape the evolving Masterplan. The plans, detailing proposals which will secure the long-term future of the city centre, will be revealed in the coming days as Aberdeen City Council and consultants BDP embark on the next phase of public consultation.

Aberdeen remains one of the UK’s key business and cultural destinations, but it is widely recognised that the city centre does not reflect the area’s success.

Key themes for the development and regeneration of the city centre have emerged following consultation with the people who live and work in Aberdeen, as well as a range of business, educational and community stakeholders.

The proposals, which could help deliver an additional 11,000 jobs and add £290million to the city’s gross annual income, include:

•  Queen’s Square: The transformation of the Queen Street area into a new mixed-use urban quarter;
•  Castlegate/Castlehill: A vibrant public square will reinvigorate Castlegate/Castlehill;
•  Denburn Valley: The reawakening of the Denburn Valley as the setting for a new generation of city living;
•  Heart of the City: Union Street gets the space it deserves through pedestrianisation of part of Aberdeen’s historic main street;
•  Union Street West: A contemporary business/retail/leisure feel to the west end of Union Street and the renovation of Golden Square and Bon Accord Square as accessible green spaces;
•  Station Gateway: A much enhanced gateway and better pedestrian routes to and from the railway station to radically improve first impressions of Aberdeen;
•  South Dee: A new pedestrian bridge across the Dee to link to a new residential community at South Dee and enhanced riverside promenade;
•  North Dee: A significant new office and business quarter at North Dee.

The multi-million pound proposals will be showcased at a series of public consultation events in and around Aberdeen from 14-29 March. The plans, the public response to them and the project delivery plan will then be brought before Aberdeen City Council for approval in the summer.

Councillor Marie Boulton, who chairs the cross-party City Centre Regeneration Working Group, said, “We have a wonderful opportunity to deliver a lasting legacy for Aberdeen and its people. It’s terrific to see the public, the Council and the business and educational communities working together to produce a plan to maintain our city’s rightful position as a leading world energy city. The proposals are challenging, but the opportunity to transform our city centre for the better and ensure Aberdeen remains a busy, flourishing, cosmopolitan city which continues to experience strong growth and attract international business interest as well as increased tourism levels, simply cannot be missed.”