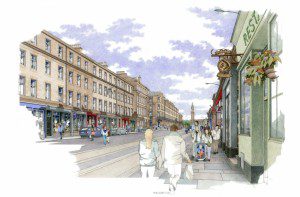 THE transformation of West Maitland Street in Edinburgh’s West End is underway through a new project to improve its shopfronts, in a joint initiative between Edinburgh World Heritage, the property owners and the City of Edinburgh Council.

The historic West End shopping street dates back to 1805, and is situated in a key location within the World Heritage Site. The street forms the main entrance to the World Heritage from the West, and also lies directly on the tram route to the city centre.

The project aims to renovate and restore up to 16 shopfronts, transforming the look and appeal of the street for shoppers and the prospects for owners.

Adam Wilkinson, Director of Edinburgh World Heritage explained, “The restoration of historic shopfronts is a prime example of how we can use the city’s heritage to support its businesses and improve the backdrop to people’s everyday lives. We’re really pleased that the shop and building owners have taken the major step of coming on board with the first phase of this scheme and look forward to others joining later phases. This sort of scheme is difficult to pull off, as there are so many different people involved, but it will have a lasting and positive impact for this wonderful street at the gateway to the World Heritage Site, with the fine Georgian terrace to the south and handsome Victorian terrace to the north.”

Councillor Frank Ross, Convener of the Economy Committee, added, “The project is very exciting for the West End of the city. Restoring the shop fronts will help to lift the look and feel of West Maitland Street. This is a perfect example of how the Council’s Building Stronger Town Centres programme can help to contribute to improving the experience of residents and visitors alike across Edinburgh.”

Peter Mill, chairman of the West Maitland Street Conservation Programme Committee, said, “Following the launch of the new tram service last year and the multi-million pound revamp of Haymarket Station, local residents and businesses in the West End are looking forward to a renaissance for the area. It’s exciting to see Edinburgh World Heritage championing this renaissance and kick-starting a local transformation on West Maitland Street with this grant offer. I fully expect to see more shop owners and tenants joining the scheme as the first phase works are completed and unveiled.”

The costs of the project are estimated at around £566,000, with Edinburgh World Heritage offering a grant of up to £425,000, half of which will be repayable after 10 years or if the property is sold. The City of Edinburgh Council is also providing financial support, with the remainder of the costs being funded by the property owners themselves.

The first two renovation projects are due to start on site in the next few weeks, and it is hoped that a further three will follow in the next few months. It is aimed to complete the project by the end of 2016.