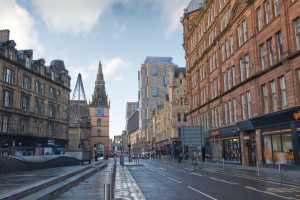 A planning application for the proposed Candleriggs Quarter mixed-use regeneration scheme has been submitted by Candleriggs Limited, comprising a 50/50 joint venture between the investment arm of Mace and funds managed by Mercer Real Estate Partners, to Glasgow City Council (GCC).

The application follows nine months of detailed pre-application discussions with GCC and local stakeholders. A well-attended public consultation was held in September last year in City Halls with over 70 people attending the event and the scheme was also presented to the Merchant City and Trongate Community Council and the Glasgow Urban Design Panel. A number of comments raised at the event and presentations were positively responded to by the team and changes incorporated into the scheme.

The proposed development is seen by many as one of the last pieces of the Merchant City regeneration jigsaw.

The site has lain derelict following the closure of the Goldbergs store and was partly cleared of buildings last year to tidy up the area ready for the 2014 Commonwealth Games. Irn-Bru created a pop up venue on the corner of Wilson Street and Candleriggs during this period to promote the brand and following the Games this part of the site was then used for a restaurant.

The development proposes a mix of residential uses above a ground floor of retail, food and drink, and commercial arranged around extensive new public realm.

The principle uses of the site are:

· 135 private for sale apartments to the north east corner (Wilson Street/Candleriggs) of the site with entrances off Wilson Street and the new public square.

· 377 private for rent apartments along Candleriggs and to Trongate with a singular entrance off the south east corner of the square helping enliven the new public space.

· Circa 5,300m2 (57,000 sq. ft.) of ground floor ‘high street’ and ‘food and beverage retail to Trongate, Candleriggs, Wilson Street and the public square. The units vary in size and cater for some of the smaller local niche retailers as well as the well-known high street brands.

A decision on the application is likely to be made summer 2015 with the works likely to commence spring 2016.

Development Director for Mace, Mike Myles said, “We are delighted to maintain the momentum on the site and move the proposed scheme to the next stage following an extensive period of pre-application planning discussions. We have worked hard over the past six months with Glasgow City Council and local stakeholders to design a scheme which we believe will positively contribute to the already successful Merchant City.”

CEO Mace Investments, David Grover said, “We are extremely excited with the plans that have been developed so far which we believe provides a comprehensive mixed used scheme that will cater for all age groups. We very much see this as a place that people will want to live, shop and relax and look forward to moving the development to the delivery stage”.