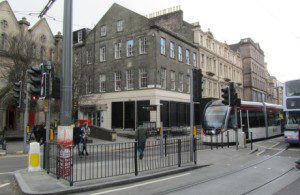 PROPERTY consultancy CBRE has announced it has secured a restaurant occupier for a prominent unit in Edinburgh’s city centre on behalf of landlord Town Centre Securities Plc.

Callum Mortimer, associate director in CBRE’s Retail team in Edinburgh, said, “In the last 18 months we have seen a notable surge in demand from restaurant operators keen to take space within Edinburgh city centre, however there is a lack of availability, particularly for well configured units of over 2,000 sq ft. Subsequently when opportunities arise there tends to be strong competition which results in increased rentals being offered alongside long term leases, significant fit-out spend on the property and relatively low incentives.

“The strength of Edinburgh’s restaurant market has resulted in many operators monitoring the market for opportunities at an early stage; therefore we were able to achieve a fantastic result for our client despite not having to promote the property formally. ASK will be a fantastic brand for this flagship location at the west end of the city centre, which will be its first outlet in Edinburgh.”

ASK Italian is due to open for trading in early 2015.