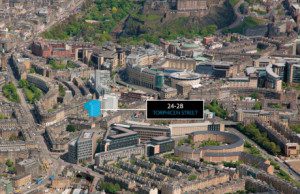 INTERSERVE has announced a major hotel deal with Whitbread PLC for  a new Premier Inn hotel in the West End of Edinburgh.

The 150-bedroom hub will be developed and built by Interserve on a site in Torphichen Street. This will be the third major city-centre development scheme involving Whitbread’s Premier Inn which Interserve has secured over the last 12 months.

Welcoming the announcement, Interserve executive director Dougie Sutherland said, “This is another fantastic development scheme in Edinburgh and sits comfortably with the Haymarket site that we are already developing. The scheme also reflects the successful partnership that we have built with Premier Inn and we are now developing two sites in Edinburgh and one in Newcastle for them. Interserve is now one of Premier Inn’s largest UK partners.”

The hub by Premier Inn is Whitbread’s innovative compact hotel format which made headlines by launching a new app allowing customers to book, check-in and even dim the lights and adjust the temperature of their hotel room.

Kevin Murray, Senior Acquisitions Manager for Whitbread Hotels and Restaurants added, “The new hub by Premier Inn represents an £11.4m million investment in the city and the creation of 35 new jobs for the local area, around half of which will be offered to those who have been long-term unemployed.”

Interserve has completed the purchase of the site and submitted a detailed planning application. As a result, work is anticipated to start on site by early summer 2015.

Interserve has secured a full, forward-funding deal from Aberdeen Asset Management to purchase and fund the development on a turnkey basis for Premier Inn.

For the Torphichen Street deal, Dougray Smith and Burness Paull acted on behalf of Interserve, with JLL and CMS Cameron McKenna acting for the funders