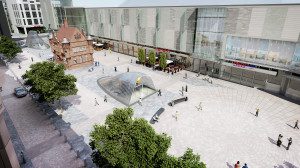 WORK is underway on the eye-catching new entrance canopies for St Enoch Subway Station in Glasgow.

SPT’s main contractor, GRAHAM Construction, has started installation of the steel frame for the new station canopy at the station’s north entrance at Argyle Street.

Once completed, both the Argyle and Howard Street entrances will feature striking glass structures inspired by the Kibble Palace in Glasgow’s Botanic Gardens. SPT believes the unique glass design will become a talking point with visitors to the city as well as regular Subway users and the people of Glasgow.

SPT’s £5.3 million investment to redevelop the station saw works begin in February 2014 and GRAHAM has already made significant progress below ground, with the station interiors revamped in time for the Commonwealth Games.

The new station office also incorporates the travel centre to provide an improved customer service and provide more efficient use of available space on the concourse. GRAHAM has also installed energy efficient lighting coupled with new suspended ceilings and new floor and wall tiles at platform and concourse level.

GRAHAM Construction regional director Gary Holmes said, “While a lot of work has already been completed below ground, the installation of the glass canopies will be the first evidence of the transformation of St Enoch Station above ground.”

SPT Chief Executive Gordon Maclennan, said, “Modernisation of the Subway is progressing at pace and the redevelopment of St Enoch Station is one of the most exciting aspects of the project so far. Passengers have benefited from the internal improvements made to date and we’re confident that everyone using the station will enjoy the striking new look station exterior.”

Work at St Enoch is expected to be completed by summer 2015.