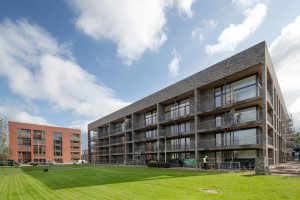 LAURIESTON – in the heart of Glasgow – has been awarded ‘Best Social Housing Development’ at the prestigious Premier Guarantee Excellence Awards, which celebrate the best of the UK construction industry.

The £24 million housing development of 201 homes – built by Urban Union for New Gorbals Housing Association – marks the completion of the first milestone in the £100 million regeneration of the area which is one of eight Glasgow City Council priority Transformational Regeneration Areas (TRAs).

In the mid-2000s, Glasgow City Council led and funded an award-winning master-planning exercise which led to the Laurieston project being selected in 2009 as one of three initial pilot TRAs, supported by the regeneration partnership – Transforming Communities: Glasgow (TCG).

Bailie Liz Cameron, chair of Transforming Communities: Glasgow and Glasgow City Council’s Executive Member for Jobs and the Economy said, “I am delighted to see this first phase in the transformation of Laurieston receive such an accolade. The exemplary design has set the tone for what we aim to become one of the city centre’s most desirable urban neighbourhoods, providing high quality homes across a range of affordability levels.

“Partnership working in its truest sense has been key to the success of this project so far, both between the partners of Transforming Communities: Glasgow and most importantly, with the local residents and our delivery partners Urban Union and New Gorbals Housing Association.”

Held at one of London’s most iconic skyscrapers, the Heron Tower, the awards gathered the best of the construction industry and the project triumphed in its category over social housing developments in Hampshire, London and Edinburgh.

Commenting on the accolade, Raymond Shannon, chairperson, New Gorbals Housing Association, said, “We are proud that the hard work of the Association and McTaggart Construction and our partners Urban Union, has been deservedly acknowledged with this prestigious award.”

The landmark project was financed by Glasgow City Council and the Scottish Government with development consortium Urban Union appointed by the Council to transform the area in 2012.

Janice Russell, director, Urban Union said, “This award is a testament to a successful delivery of our vision of providing quality housing for the people of Laurieston, transforming the area with high-quality affordable city living at the heart of a revived urban city-centre quarter. We are delighted to have worked with our contractor McTaggart Construction to deliver such an exceptional award-winning finished product.”

Commenting on the award, Peter Bennett, judge, Premier Guarantee Excellence Awards, said, “There is a tremendous volume of affordable housing currently under construction in the Glasgow area. This particular development will ultimately be in excess of 800 units and will include a wide variety of property types with the standards achieved particularly high. This extraordinary scheme is both challenging and rewarding and the team is to be complimented and congratulated on this truly exemplary development.”