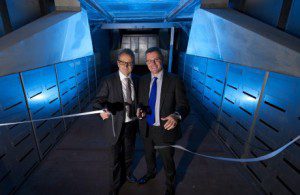 EQUIPPED specifically to process ever larger components in the oil and gas industry, the UK’s largest curing oven of its kind has been unveiled at the opening of Surface Technology’s new site in Renfrew.

It was opened by the CEO of Norman Hay plc, Vic Bellanti and Derek Mackay, MSP. Other attendees included David Rennie from Scottish Enterprise, who have provided funding for Surface Technology to develop their existing Scottish operations, along with other Westway Park members and around 50 Surface Technology customers including One Subsea, X-Cel Superturn, FMC Technologies, Oil States Industries and Sheffield Forgemasters Engineering Limited.

Derek Mackay MSP for Renfrewshire North & West said, “Surface Technology is a leading global player and it is pleasing to see development at this new state-of-the-art facility at Westway Park. Already it is bringing additional investment and jobs to Renfrewshire and the west of Scotland.

“Surface Technology’s investment in this site, as well as further development at East Kilbride will enable the company to service and support the changing infrastructure, technologies and capability demanded by the offshore oil & gas industry.”