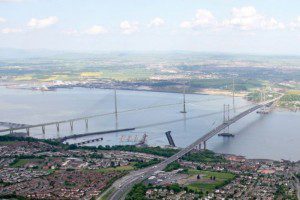 THE overall cost for the Queensferry Crossing will be £50 million lower than the previous budget estimate made in 2013.

The further reductions in the FRC budget are the result of the continued delivery of key construction milestones, successful management of the project and prevailing market conditions.

Deputy First Minister Nicola Sturgeon revealed the news by saying, “It is very positive news to be able to announce a further £50 million worth of savings from Scotland’s biggest infrastructure project in a generation. We have already seen last year’s savings from the FRC benefit other projects, allowing work to start early on the dualling of the A9 for example.

“The progress made since construction started in June 2011 means we have delivered £195 million worth of savings. The sound management and delivery of the scheme should be warmly welcomed. Not only is the project delivering value for money it is also benefiting the Scottish economy with subcontract and supply orders for Scottish companies and over 1,000 people currently directly employed on site.

“We recognise there are still challenges to overcome in the years ahead but it is very pleasing to report that with the first sections of deck being placed just last week, the project remains on schedule to be complete by the end of 2016.”