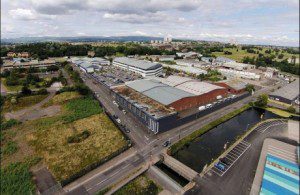 100 Borron Street Business Park has smashed its tenancy forecast, one year after being re-launched by Scottish Canals.

The site, located in the Port Dundas area north of Glasgow City Centre is now almost 70% full with a number of enquiries in the pipeline.

Last October the park was re-launched by Scottish Canals in a joint venture with partner Igloo Regeneration Partnership, an Aviva Investors fund.

Since then it has welcomed a string of new tenants including bicycle training venture, Play on Pedals, sport’s rehabilitation services Rehabworks and a selection of occupancies linked to both the 2014 Commonwealth Games and the city’s arts sector.

The business park has undergone a major upgrade process, with around £1.2million being invested into the site after being bought from administrators following a long period of decline.

Scottish Canals Estates Manager, Markus Kroner, said, “Interest in the business park has been extremely reassuring and I’m pleased with how the pipeline of leads has been progressing. The park’s location is one of its strongest attributes, just to the peripheral of Glasgow’s centre but beside main transport links for ease of access.

“There is also a wide selection of work spaces of varying sizes which contributes to the diverse range of businesses which make up our tenancy list. We still have some units to fill but after 12 months of management, I am confident much of the recent interest will come to fruition.

“Interestingly, many of our spaces have been used as short-term, temporary venues for events, filming and arts projects which are avenues we will continue to focus upon as we further our position as a place for business, arts and leisure.”