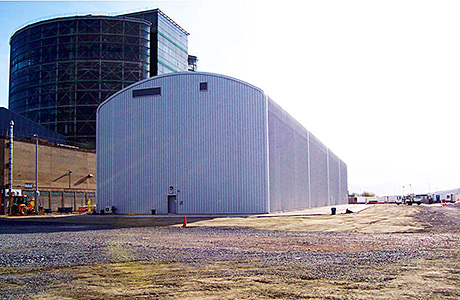 The project marks the final link in Magnox’s process chain of safely encapsulating and storing intermediate level waste as part of the decommissioning of the nuclear power plant.
Balfour Beatty will be responsible for the final design of the encapsulation process and construction of the SILWE plant including the complex mechanical, electrical control and instrumentation required.
The twin reactor site was Scotland’s first civil nuclear generating station and at the time of opening in 1964 was the largest in operation in the world. While the plant was active, and since it ceased operation in 1989, the solid intermediate level waste has been stored in bunkers.
Hector MacAulay, Balfour Beatty Delivery Unit Managing Director, said, “Balfour Beatty has a strong track record in delivering the UK’s power generation solutions and has over the years been involved in the successful completion of many projects at Hunterston A, including the ILW store.
“Our team looks forward to continuing to work with Magnox, its key strategic contractors and our experienced supply chain partners to deliver the project.”