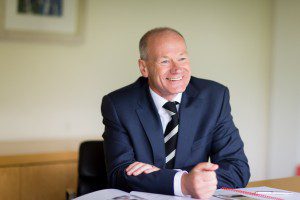 GREG Fitzgerald has announced he is to retire as Chief Executive of Galliford Try after 33 years with the company.

He will leave his post no later than the end of the next year and the process to appoint a successor is already underway.

Mr Fitzgerald said, “After 33 very enjoyable years at Galliford Try I have decided to retire no later than the end of 2015.  My decision is a personal one and I am fully committed to delivering the Company’s growth strategy. As our full year results announced today demonstrate, the Group is in great shape, with a strong management team, and very well equipped for the future.”

Ian Coull, Chairman, said, “On behalf of the Board I would like to thank Greg for his excellent leadership and vision over the last nine years in his role as Chief Executive. The company has a clear disciplined growth strategy against which we are making strong progress. We have begun the search for Greg’s successor; Greg is committed to ensuring a smooth transition and will leave the business in a strong position for his successor.”