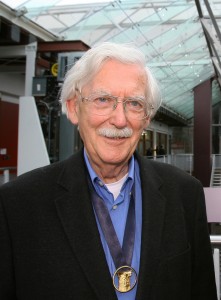 THE Royal Incorporation of Architects in Scotland (RIAS) has notified its members and friends of the death of Professor Andrew (Andy) MacMillan.

Andy died suddenly on Saturday in Inverness, during this year’s RIAS Andrew Doolan Awards visits, which he was chairing.

RIAS President, Iain Connelly, also one of the Awards judges, said, “Andy was a great architect, an educator of international renown and one of the finest human beings it has been my privilege to know. His influence on generations of students at the Mackintosh School of Architecture and in the many other institutions where he taught, was immense.

“Andy’s contribution to Scotland was among the most significant of any architect in the post World War II era. He will be remembered as someone who lived life to the full, who inspired all those he taught and all those who encountered him, as an individual of enormous talent, tremendous enthusiasm and irrepressible fun. Andy’s legacy is the hugely improved built environment of Scotland wrought by his own hand and those of successive generations of his students. He will forever be missed.”


Andy’s wife has indicated that his family are planning a private funeral but that a celebration event will be announced shortly. She has also requested that, rather than give flowers, those who wish to mark Andy’s memory should give to the restoration fund for St Bride’s Church, East Kilbride.

Andy is survived by his wife Angela, their three daughters, their son and three grandchildren.