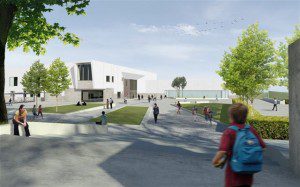 THE City of Edinburgh Council (Portobello Park) Act 2014 has received Royal Assent, allowing work to start on building the new Portobello High School on Portobello Park.  Welcoming the news, Councillor Paul Godzik, Convener of Education, Children and Families at the City of Edinburgh Council said, “Now that Royal Assent has been received, it will be full steam ahead with our plans to replace Portobello High School.  Over the last few weeks, since the Parliament approved the legislation, officers have been preparing to appropriate the park and sign the building contract with Balfour Beatty and both will now take place over the next few days.  In a few weeks work will start on Portobello Park as Balfour Beatty start to prepare the site for the construction works.“This is a hugely important milestone in the new school project and I know staff and pupils returning to school next week will enjoy, as I will, watching the progress on site as their new school is built. The Portobello community have waited many years for their new school and I look forward to the opening of the new school in August 2016.”The City of Edinburgh Council (Portobello Park) Act 2014 enables the Council to appropriate Portobello Park for educational purposes.Following Balfour Beatty’s appointment they will ensure arrangements are put in place to ensure local residents are kept up to date with the construction programme.