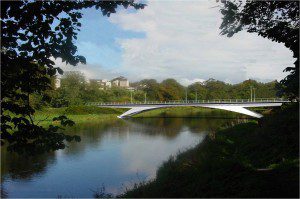 BALFOUR Beatty has been appointed by Aberdeen City Council to construct the £14.3m Third Don Crossing. The scheme is designed to relieve congestion on the two existing river crossings north of the city centre.

The firm will be responsible for the construction of a major crossing over the River Don, a smaller bridge across a mill lade and 2.5km of road, including a stretch of new carriageway linking to the road network north of the river, and the realignment and upgrade of roads to the south.

The main feature of the project is the 90m span Third Don Crossing. The bridge will be constructed using twin open box steel girders supporting a reinforced concrete deck.

George Hood, Balfour Beatty Managing Director for Northern Scotland, said, “Balfour Beatty has a strong track record in successfully completing vital regional road schemes across the country.  We are delighted to be awarded the Third Don Crossing contract and we look forward to working with Aberdeen City Council to deliver this important project.”

Construction work is due to start imminently and the new bridge is expected to be open to the public by late 2015.