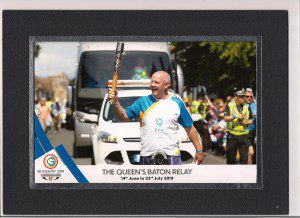 CRUDEN Homes’ Stirling Bridge site manager, Phil Purves, has described how honoured he was to take part in the Queen’s Baton Relay on its recent journey through his home town of Tranent in East Lothian.

Phil was chosen to take part for his voluntary work he does within his local community. He is Chairman of his local kids’ football club, Tranent Colts FC, a position he has held for the last eight years having been involved with the club since 2001. He’s also on the committee of the community football club as well as the community sports hub.

Phil was nominated to take part in the baton relay by fellow coaches from the kids’ football clubs and subsequently became ‘baton bearer 50’ with the job of carrying the baton from the fire station in Tranent to the local library – the regulation distance of 200 yards.

Phil said, “I was really honoured when I got confirmation that I was to be a baton bearer. My initial plan was to jog through my section, but when I saw the crowds of people supporting the event, I thought I would just walk it and take in the atmosphere. It was an absolutely fantastic day both for myself and my family.”