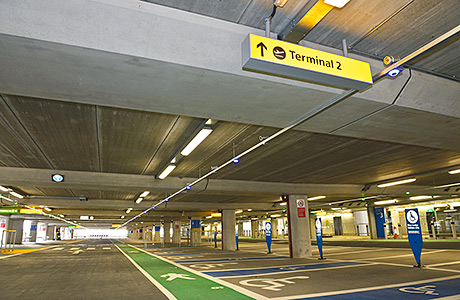 OVER 40,000 square metres of concrete flooring has been produced by Bison Manufacturing for Heathrow Airport’s Terminal 2.

The project gave the Uddingston-based firm the opportunity to develop a new product that they had never been required to manufacture previously.
At 60mm deep, the flooring slabs produced for Terminal 2 were specially created for the project and are the thinnest to be manufactured in Britain.
Bison produced flooring equivalent to almost 10 acres and enough to cover around six football pitches.
The firm will have their work showcased on a global stage with more than 20 million passengers from around the world set to use the new terminal every year.
The lucrative contract accounted for half of the factory’s output over eight months, with 20 staff from the local area retained to help meet the increased workload.
The £2.5bn infrastructure development is one of the largest privately funded construction projects in the UK.
More than 140 UK businesses have been involved in its construction, drawing together expertise from across Britain and supporting over 35,000 jobs. Rt Hon Tom Clarke, MP for Coatbridge, Chryston and Bellshill, recently met with representatives from the company and toured T2. He said, “I have been thoroughly impressed by what I have seen.
“I am so proud of their link in the Uddingston part of my constituency. This whole enterprise is going places and I want to give it every encouragement.”
Jim Harley, Operations Manager at Bison Manufacturing added, “We still use all the new techniques we developed on the Terminal 2 project today, including a new machine we invented specifically for this job.
“All in all it was a great success story and raised the bar in terms of the quality of pre-stressed flooring in our industry. We are now recognised as having the best quality hollow-core product in Britain.”
John Holland-Kaye, Heathrow Development Director, said, “It is great news that the development of Terminal 2 has enabled Bison Manufacturing to recruit staff and develop an innovative new product.
“Major infrastructure projects have enormous potential to be a catalyst for growth in every part of the UK.
“Terminal 2 has enabled a wide-range of businesses to grow their knowledge, skills and people, the benefits of which will be felt not just now but for many years to come.”
Terminal 2: The Queen’s Terminal marks the latest phase of the airport’s £11 billion transformation.
The new terminal will eventually serve 20 million passengers a year and be home to 23 Star Alliance airlines, as well as Aer Lingus, Virgin Atlantic Little Red and germanwings carriers.
25,000 staff, many from local communities, will be trained so they can work at T2.